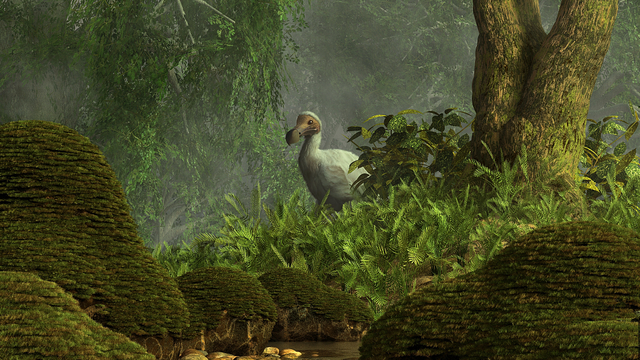 In the modern world, they have become real symbols of the struggle for the conservation of endangered animal species. It is believed that the last dodos died more than 300 years ago, so scientists don’t know much about them. Nevertheless, some interesting facts about the life of these strange birds have survived to this day.

It is not known exactly how the dodo ended up on the island of Mauritius, which is located in the Indian Ocean east of Madagascar. It is believed that they were the ancestors of ancient pigeons who accidentally landed on its shores and remained here to live. Birds find new comfortable habitats and breed well, developing for hundreds of years. Gradually, they forgot how to fly and became much bigger. The first dodo was seen only in 1598, when the first Dutch settlers arrived on the island of Mauritius. In other parts of the world, the bird has never lived. After 65 years, all dodos became extinct. The last time a man managed to see a dodo was in 1662.

Before people came to the island, no one hunted birds

The Mauritian dodo is a peaceful bird that lives a quiet life. Not a single predator on the island can hunt them. The local insects and reptiles do not harm them either. Because of this, the dodo lacks any protective equipment that can save them during an attack. They don’t know how to fly, run slowly and are very gullible and curious. The Dodo were not afraid of the Dutch colonialists, on the contrary, they themselves approached them closer to see the strange new inhabitants of the island. They did not suspect that the person intended to kill them and eat them. Thus, dodos became easy prey not only for people, but also for predatory cats, dogs and monkeys brought from the land.

Scientists believe that the dodo ancestors were able to fly. It was with the help of these wings that the doves arrived on the island. But over time, they don’t need them, because they don’t have to travel long distances or run away from predators. Therefore, during their evolution, they became flightless birds. The same process occurs with penguins and ostriches. The weight of the dodo also grows significantly. The dodo resembles a modern turkey in size.

The dodo bird only lays eggs one by one

Evolution is a conservative process, so each animal will produce as many young as nature needed for reproduction. Dodo live in heaven, where no one is after them, so their females only lay one egg at a time. This fact is also one of the reasons for their rapid extinction. The monkeys that people bring to the island quickly learn to plunder dodo nests. Cats, mice, dogs, and even pigs are preferred for hunting chicks.

For a long time, scientists believed that the Dutch killed all dodo because of their meat, reminiscent of chickens. But recent research has proven that dodo isn’t tasty. However, the starving sailors were not very picky. First of all, they are attracted by easy prey, because the birds are not at all afraid of them. As a result, they were able to kill nearly all of them, and the dodo meat was eaten or salted so it wouldn’t deteriorate.

The manned pigeon is the closest relative of Dodo

Dodos are unique birds, scientists consider it a real anomaly. Using genetic analysis of their surviving remains, they were able to determine that their closest living species was the dove. He is much smaller than the size of the dodo and can fly. At the same time, these pigeons lived in the southern part of the Pacific Ocean. Another related species is the Rodriguez dodo, which lives on the island of Rodriguez. Unfortunately, he suffered the same fate as the dodo. They were also exterminated by the invaders who arrived on the island in the 17th century.
Vallouberd – the original name for the dodo

Scientists didn’t have the opportunity to study the dodo when they were alive, because all the birds have been dead over the decades. Even during the life of the dodo confusion arises with their names. The Dutch call them Wallubers, and the Portuguese call them penguins. Now scientists don’t even know where the name dodo came from. Most of them believe that it comes from the Dutch word dodoor, which is slow.

It should be noted that the Dutch did not plan to destroy all dodo. They sent some live birds on ships to Europe so scientists could study them. But most dodos don’t survive the long journey. Hence, few remains of this unique bird. The dry head and feet are kept in the Oxford Museum of Natural History. Parts of the dodo skull and claw remains can also be seen in Copenhagen and Prague. Scientists can also simulate complete dodo bird models so that people see what they looked like before extinction.

Maybe scientists will be able to resurrect the dodo

Modern technology is actively developing, and scientists now have scientific programs that, in theory, can revive extinct species using well-preserved DNA fragments. Scientists have managed to collect a lot of dodo remains, so that they have enough genetic material. Additionally, they can get it from the maned pigeon, which is a close relative of the dodo. But it’s now impossible to say whether scientists can actually make the dodo live. Even if their experiment is successful, they primarily intend to revive the mammoth.