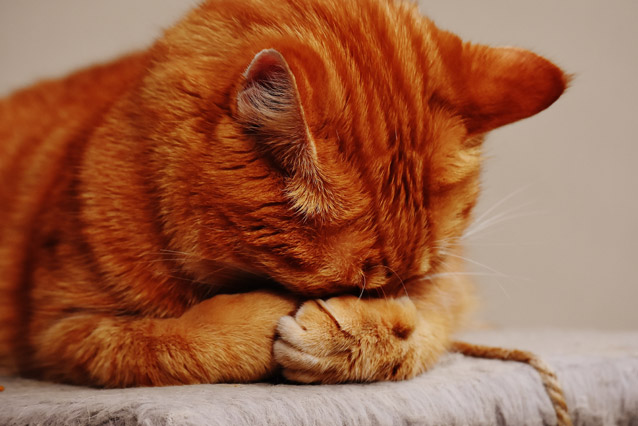 As a pet cat owner, you must have found that your favorite cat’s ears have quite a lot of earwax.
Ear wax in any type of cat can be called wax or ear wax, which is normal because it protects the cat’s ears so that foreign objects do not enter the deeper ears. However, when earwax is overproduced and causes a bad odor or unpleasant odor then it becomes a problem.
The smell of earwax is accompanied by a buildup of earwax, it is also accompanied by itching of the ears. Smelly earwax indicates inflammation of the ear or otitis disease.

How To Treat Otitis In Cats

There are so many potential causes of ear problems, we can’t just say it’s a bacterial infection, giving antibiotics alone won’t cure it. Your pet cat vet can use the otoscope to look down into the ear canal and determine if there is inflammation of the cat’s tympanic membrane (eardrum), if there is a foreign body, tumor or other potential cause of the cat problem.

Swabs from the cat’s ears can be taken, smeared on a microscope slide, stained and examined for bacteria, fungus and mites. A physical exam can help to determine if this could be a problem, hormonal allergies, or heredity. If this can be suspected, further diagnostic tests will be required.

Signs of ear disease in cats:

Pet cats can have ear problems for a variety of reasons. When we look at cats with ear disease we as cat owners need to think about the possibilities:

Allergies: Cats with allergies, whether they are allergic to food or something they breathe, may have ear problems. Ear problems in cats may be the first sign of an allergy. Since allergies are environmental changes in the ear, we cat owners sometimes see secondary infections with bacteria or fungi. If we only treat infections that the cat has, we don’t get to the root of the problem. We need to treat allergies immediately too.

The cat ear mite, Otodectes cynotis, is a common cause of ear problems especially in kittens. Some animals are very sensitive to mites and itching is constant. These animals can scratch so much they are so traumatic to a cat’s ear

Many types of bacteria and fungi, one of which is Malassezia pachydermatis, cause ear infections. Normal, healthy ears have a fairly good defense against organisms, but if the ear environment changes due to allergies, hormonal disorders, or humidity, bacteria and fungi can greatly multiply and infect them.

Small foreign objects that can enter a cat’s ears can sometimes enter the ear canal. This foreign object causes irritation, as well as scratches the cat’s ears. So if you have a cat that often goes out and about until the cat fights, be sure to check its ears regularly.

As we explained above, trauma to the ear due to scratching can exacerbate ear problems.

Hormone deficiency or excess of various hormones can cause skin problems and cat ears. Hormones called thyroid, glucocorticoids produced by the adrenal glands, and sex hormones can all affect the health of the skin and ears.