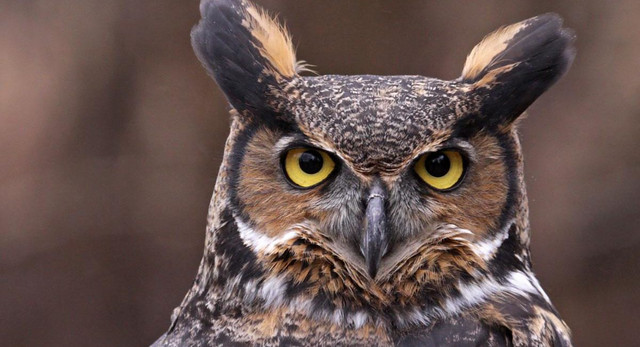 Owl has been a popular animal for a long time. This animal is often associated with various myths and magical worlds, including the one made famous by the box office film Harry Potter, as a mail carrier in the world of witches. In England, owls are indeed animals whose appearance is often considered to bring good luck. But different in several places in Indonesia, some argue that the appearance of owls is closely related to death or misfortune. Just hearing the name can feel a different aura.

1. This bird can swim

Photographer Steve Spitzer managed to take a video at Loyola Park Beach, Chicago, America, when a large horned owl swims across the lake. This bird avoids the attacks of two predatory eagles by entering the water.

2. Not all owls are nocturnal

Owls are known for their nocturnal lifestyle (active at night), but some are not.
Some owls are diurnal, meaning they hunt during the day, such as the great gray owl (Strix nebulosa), northern eagle owl (Surnia ulula) and northern dwarf owl (Glaucidium gnoma).
Perhaps this type of owl is a daytime hunter because of its choice of prey, such as songbirds or small mammals, which also behave diurnal. In addition, owls are close relatives of eagles, which are diurnal birds.

Owls have 14 vertebrae in the neck, 2x as many as humans. This unique anatomy helps owls turn their heads up to 270 degrees. Owls are able to do this because their vertebrae have an opening that is about 10 times the size of an animal carrier blood vessel. That way, with plenty of wiggle room, the arteries can easily pass through the vertebral opening when the owl turns.
This ability is the key to a bird’s survival: Owls cannot easily move their eyes, so they need excellent neck-turning skills.

4. The largest type of owl is extinct

The largest owl on record is the giant owl from Cuba (Ornimegalonyx) which has become extinct.
Experts are not sure if the 1.1 meter high owl can fly. However his strong and long legs indicated that it was a strong and fast runner. And if this animal could fly or glide through the air, it would be one of the largest flight birds the animal world has ever known. Researchers have found Ornimegalonyx left in Cuban caves, usually surrounded by the remains of bird prey, including sloths and extinct rodents known as hutias.

Barn owls (Tyto alba) brought peace to the Middle East, or at least they brought scientists and farmers on both sides of the war together to talk and cooperate with one another.
These birds are predators and catchers of star and vole mice (a type of rat but fatter), which encourages farmers in Israel, Jordan and the Palestinian territories to work together to install boxes for owls to nest.

A pair of owls can eat up to 6,000 mice per year, which means that farmers do not need to use as much pesticide poison as possible to protect their crops. Collaboration is still continuing, and a pilot program between Israel and Cyprus is already under way. Owls have false eyes to trick their predators. Photo: Michael Durham / minden pictures / newscom / lifescience

6.Have False Eyes for Camouflage

The northern dwarf owl has bright yellow eyes on its face and black fur on the back of its head which looks creepy.These “eye” spots may slow down or deter predators coming from behind. Predators don’t like to attack if their prey sees them, and eye spots can slow it down.
Remember, northern dwarf owls are active during the day, so predators will be able to see their eyes regardless of which direction they approach this little owl.

7. The feathers are not waterproof

Very rarely do we see an owl hunting in the rain. Owls have fine feathers that allow them to hunt in secret. However, their fine hairs absorb a lot of water.

Owl is a clever nest thief. They do not build their own homes, but instead use nests or tree cavities left by other birds, such as porous woodpeckers or northern flickers. owls have zygodactyl claws, which are two opposing fingers. Photo: shutterstock / lifescience

9. The toes are opposite

Owls have zygodactyl claws, which means they have two opposing fingers.
Two paws point forward, and two claws back. When catching prey, claws like this will be able to grip the prey firmly.

10. This bird is capable of flying long distances

Snow owls (Bubo scandiacus) usually live in the Arctic region, but very often they fly far south.
In 2013-2014, this bird flew far south, to Florida and Bermuda. This bird has also flown from the arctic region to 4,800 km to the south and landed at the Honolulu International Airport, Hawaii. Unfortunately, airport officials shot them for fear of disrupting air traffic.